I have had these two frogs for a few years now sitting in my gardens. These frogs are in pretty sad shape, I really need to do something to spruce them up….but what??? hmm 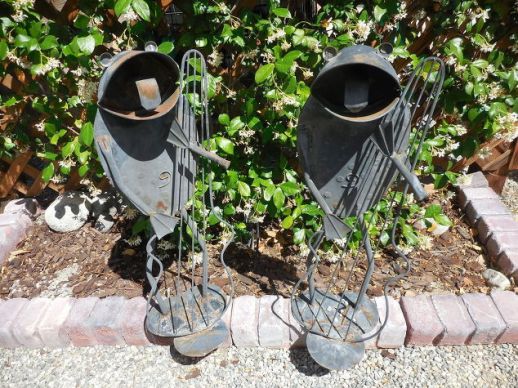 I told you they look pretty sad don’t they!?! Hmm…what to do.  I started by cleaning them up and scraping off the rust, then sealing with Rustoleum Stop Rust here . Now I don’t have to worry about rust again. Then I painted them with Rustoleum 2x Green Apple Spray Paint here.

I was really getting excited about this project, I had so many different ideas. I decided to make one a lady and the other a man. I used a red sharpie for the lips of the one lady frog. I decided to decorate the frogs with those vase fillers, or gems, you can buy at the Dollar Tree They come in so many pretty colors. I used Goop adhesive, I already had, because it's great for the outdoors (heat and rain) and dries clear. I went to the Dollar Store and purchased a bunch of the vase fillers in different greens and blues. I then headed over to Walmart and purchased the small green packages with the black net have the plain (non shiny) kind of look like pale sea glass gems you see below.

To give the gems (ones from Dollar Tree a crystallized look, I baked them on a cookie sheet at 450 degrees for 20 minutes. This is the same as we used to do with marbles…way back when. 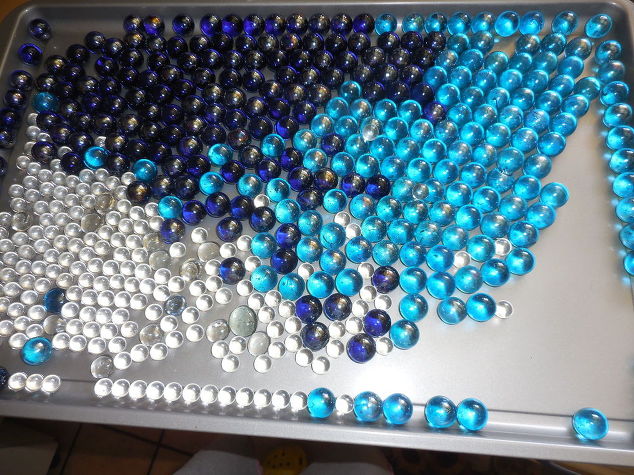 After 20 minutes, I carefully, (the gems and pan are very hot) let them drop into a bowl of ice water I had ready for them, and you can put the sheet on top of bowl with ice…just to be safe.

A couple of them didn’t make the bowl…ouch, they were hot! You can hear them crack. Kids might want to watch this, but be careful that they don’t get to close……hot!!!This is what the round ones looked after baking: 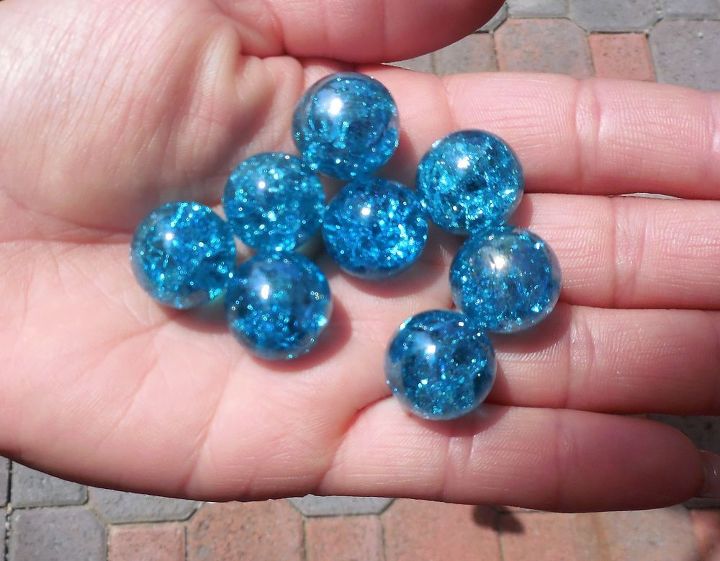 See how the insides are cracked…they sparkle so much more….aren’t they pretty!

I first started out by painting their bodies with a green spray paint from Rustoleum 2x. Great for outside, doesn’t lose its color. I used the darker round blue for the males guitar. I used the flat green gems for their bodies. 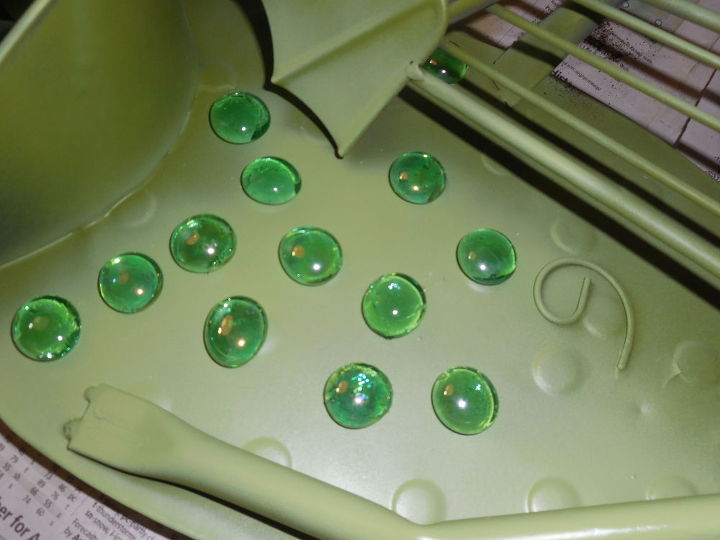 For the mouth I used stones of same color that didn’t sparkle. I used the flat ones for the bodies and mouths of the frogs. 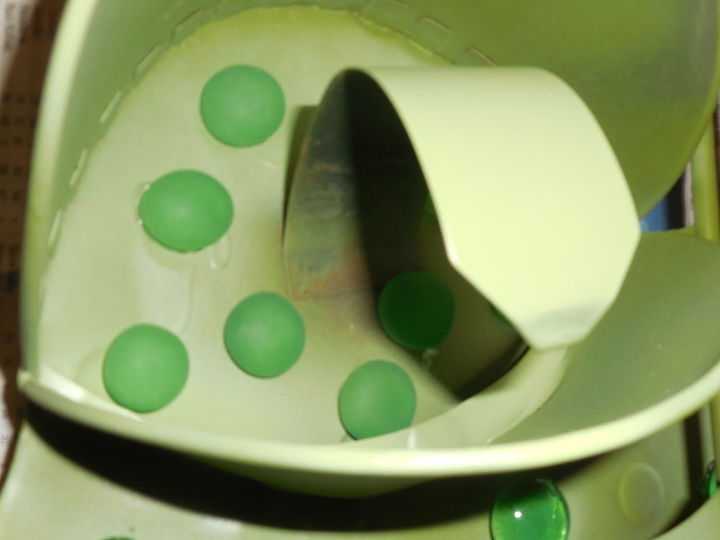 I painted the girls tongue yellow….Put in the turquoise fillers for their eyes. I used the round gems for their guitars.

I didn’t have enough of the turquoise gems, dollar store only had the two packs. I plan to get more of the turquoise…10 bags….make a pond shape where they are standing in the roses and fill it in with the turquoise and green gems..I think that will look so pretty and sparkly… 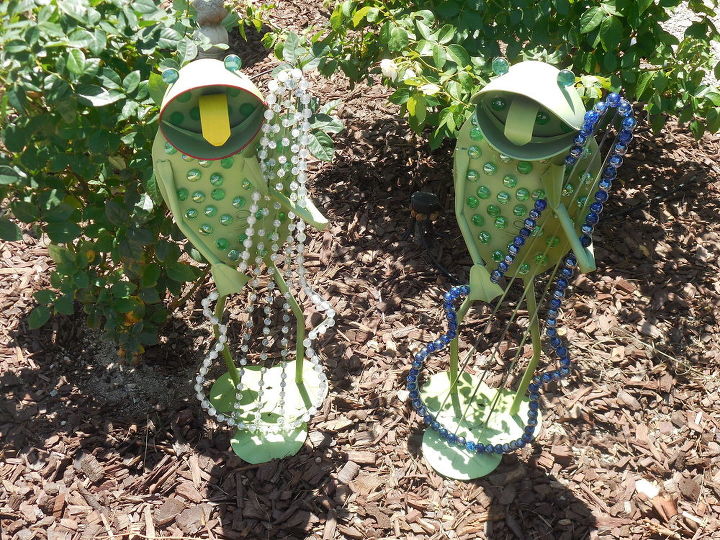 Above they are in rose garden, and look adorable!! What a difference a little paint and glass fillers can do!

A couple of days later, I was sitting outside sipping my coffee, looking at the froggies. They look so alone out there by themselves…now my brain is in overdrive….they deserve more…

I was thinking of a pond. Wouldn’t it look pretty where they are standing in the roses and fill it in with the turquoise and green gems..I think that will look so pretty and sparkly…I will need a lot of gems….hmmm. Now this is where my perfectionist brain comes in. They were all set up in the rose garden, but I couldn’t see them from the house the way they were situated. So back to the drawing board. Now in the meantime while I was trying to figure out a place for it, another idea struck. I remembered I had a pallet ….Now I was getting another idea. I painted a pallet in blues (my favorite color).

Don’t you just love those colors! Rustoleum 2x Green Apple,  Ocean Mist , Aqua and Cornflower blue. I was planning to make it a herb planter, but hopefully, I can always find another. Then a idea struck! since the frogs were ready, I could make this a neat backdrop for them. Then I thought of making it a billboard with their stage names on it. I made the letters with the glass gems from the Dollar Tree. 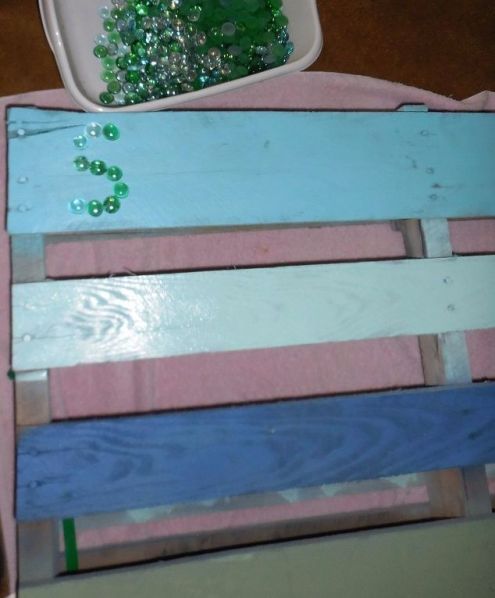 I remember seeing a sign in the dog section at a store, that I loved. It said’ Sandy Paws and Salty Kisses’. It reminds me of the beach and my doggies…so that’s their names. LOL Next week I am having a pool put in. I want the frogs by one area of the pool…this will look so cute by it, and warms up a corner. I decided to put it up temporary to see how it looked. I had added a net, shells, pearls, starfish and seahorses

I gathered the blue plastic tarp I had purchased at the Dollar Store. I racked away all the small stones in the area, and cut the blue tarp into a kind of oval shape, kinda. I added some gems to the pond. Along the side of the pond I put some planters, the Frog King statue, and the little frog prince,

lots of fans!!! Even Mr. Turtle showed up! 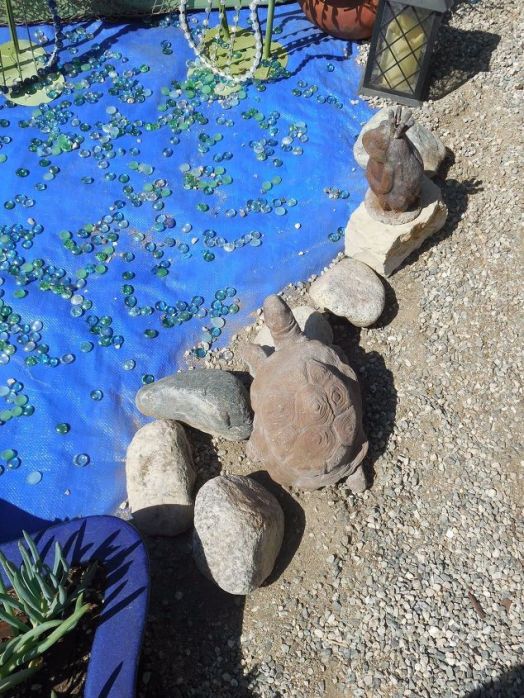 This is how it will sit for the next couple of weeks. I did put a solar spotlight on it for nighttime performances. Its positioned so when I’m sitting under the pergola, it’s like they are performing for me! Imagination sparks creativity!
I think I am going to add some color to their fans!!!
So what do you think? Did I give you any ideas? 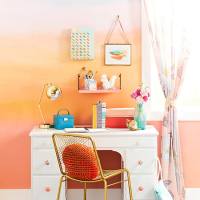 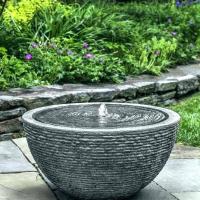